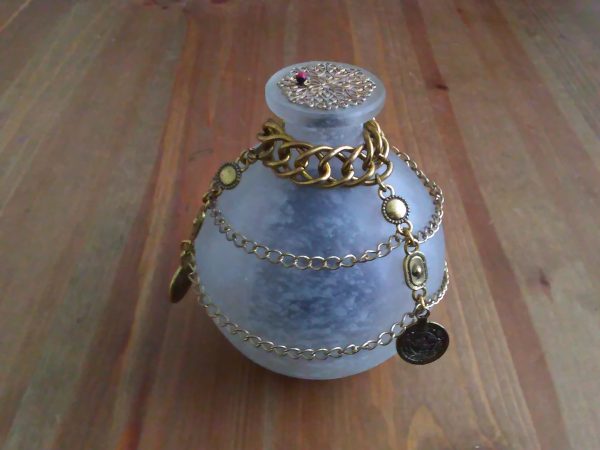 Little has been written or recorded about the Hedge Alchemists of the Salt Flats, and most of the known primary research folios are contained in the Institute’s San Francisco office.  And yet it remains a still living, still vital, traditional in 21st century regional alchemy.

One of their most fascinating techniques is the construction of Shadow Jars.  Through a process which to outsiders most resembles an intense form of encounter therapy, Sal Flat Hedge Alchemists isolate and trap a portion of someone’s “shadow self” – the parts of themselves that, good or bad, they are most afraid of.   Those shadow elements of the psyche are then placed in these specially prepared jars, both for storage and because, in the hands of others, one’s shadow self can be a source of enormous strength and resilience.  To possess one is, it is believed, to be warded against misfortune.

The Institute has acquired a limited number of Shadow Jars that were made available after a tragic fire at a Mormon church.  They have been restored, by hand, by Institute staff Iconographic Preservationist Laurelle Hafen.  Each comes with its own Certificate of Historicity (suitable for framing) indicating whose shadow is within, and why.

(Price includes shipping in the U.S., additional shipping charges will apply for international or unusual orders. Each items is hand crafted and unique, and so may not appear identical to the picture shown. Supplies are limited and orders may be delayed if additional creation time is required after supplies have run out.)

There are no reviews yet.

Be the first to review “Shadow Jars” Cancel reply