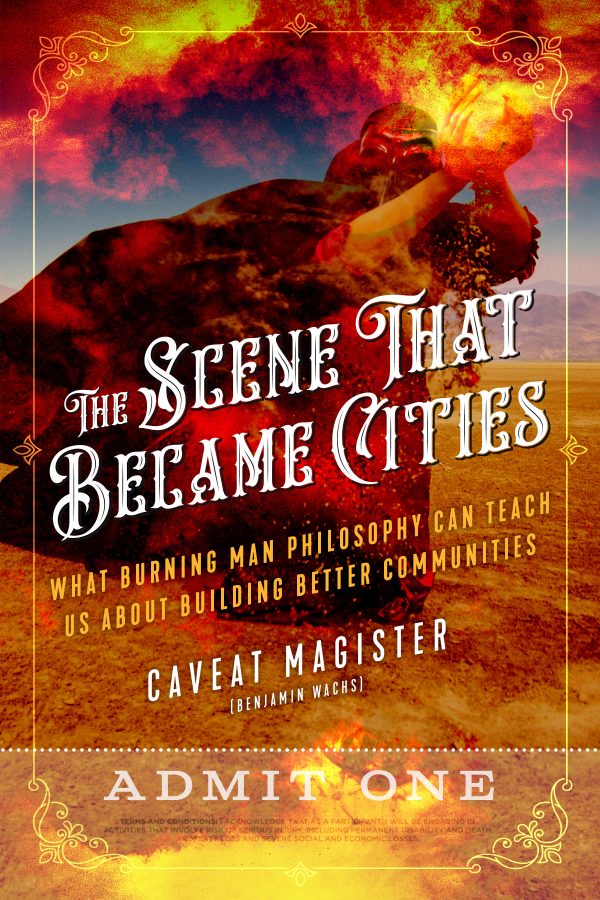 The Scene that Became Cities

The newest publication (North Atlantic Books) by Institute President Benjamin Wachs (under the pseudonym Caveat Magister) examines the philosophy and culture of Burning Man and what it has to offer modern culture.

Over 30 years, Burning Man has gone from two families on a San Francisco beach to a global movement in which hundreds of thousands of people around the world create events on every continent.  It has been teh subject of fawning media profiles, an exhibit in the Smithsonian, and is beloved by tech billionaires and boho counter-culturalists alike.  But why does it matter?  What does it actually have to offer us?

The answer, Caveat Magister writes, is simple:  Burning Man’s philosophy can help us build better communities in which individual’s freedom to follow their own authentic passions also brings them together in common purpose.  Burning Man is a prototype, and its philosophy is a how-to manual for better communities , that, instead of roles, offer principles.  Featuring iconic and impossible stories from “the playa,” interviews with Burning Mans founders and staff, and personal recollections of the late Larry Harvey — Burning Man’s founder, “Chief Philosophical Officer,” and the author’s closer friend and colleague – The Scene That Became Cities introduces readers to the experience of Burning Man;  explains why it grew;  posits how it could impact fields as diverse as art, economics, and politics;  and makes the ideas behind it accessible, actionable, and useful.

Copies will be autographed.